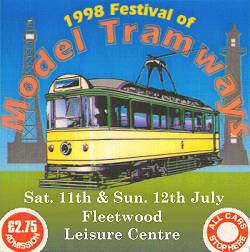 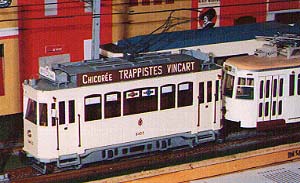 More and more new trams are being built. This is as true for the model tram hobby as it is for full-size construction of modern articulated cars in ABB York, Firema, Breda and other European factories - and even in Blackpool, as we saw with car 707 in Fleetwood on Sunday 12 July. So one theme of this year's model Festival was, I suppose, getting closer to present-day full-size practice - I touch on this more below.

This year the annual model tram Festival moved north to breezy and blustery Fleetwood for the weekend of the Fleetwood Tramroad Centenary parade by Blackpool Tramways. It proved to be a very well-attended and popular occasion with no less than forty-five stands, including twenty-five separate layouts in virtually all scales from 1/16 to 2mm - so many layouts that with great regret I cannot comment on each of them individually in this review. The venue - the local sports and leisure centre for Fleetwood - was bright and airy, with good parking and proximity to other amenities and the tram terminus, and gave plenty of space to exhibitors and visitors alike.

Each year the Festival demonstrates a shift or trend in tramway modelling - last year it was towards a new intermediate scale (G) - and this year the preponderant tendency was towards modern Continental outline and multi-axle cars (for this purpose I am including Manchester Metrolink as Continental!) and the new generation of present-day tramways or LRT. 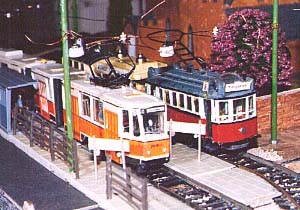 There were several modern-outline entries in the models Competition (won however by Adrian Batt with his superb 4mm Gateshead car), and a fair number of articulated single-deckers running or on display in many scales (including one of my own in G scale for which Brian Martin kindly gave me running space on his 'Station Vicinale' G scale layout). 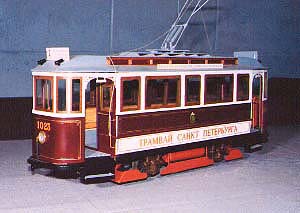 A guest model by David Orchard is this St Petersburg car in G scale. Here on show in the exhibition entrance, it later had an 'outing' on Brian Martin's layout. (Photo: John Prentice)

Of these, the Vienna multi-articulated 4mm car on the TLRS West of England layout (cleverly motorised by Alan Kirkman) gave one pause for thought as to how on earth it worked in full size, as each articulation only contains one axle, not two! Alan solved this in the model by inserting a 2-axle truck in the centre portion and making two articulations 'float', but this is not feasible when constructing in 305mm to 1 foot. 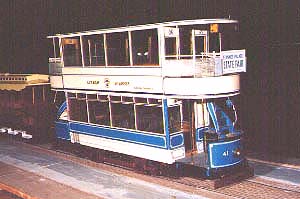 This is the display in 5/8 in to 1 foot scale by Terry Daniel. The car is Lytham St. Annes car 41. (Photo: John Prentice)

Mention must also be made of those UK-prototype layouts whose full-size equivalent could be found merely by going outside in Blackpool or Fleetwood:-

Having seen this layout several times before, I experienced a very strange sense of deja vu when I drove my Xantia down the real Lord Street early on Saturday 11 July, following a stream of traffic behind a 'Balloon' tram in traditional green/cream livery. At the moment of passing St Peter's church, which along with the trams and buildings is so very realistically modelled on Alan's layout, I suddenly felt I really was on his layout in a kind of virtual reality, and it took more than a few seconds (and a close encounter with a white Transit van) to bring me down to earth with a bump! Can I give you a model Xantia for your layout, Alan?

As visitors came into the Festival of Model Tramways, they saw this small display of Blackpool models loaned by John Prentice, the Festival Manager, which was accompanied a photo display on the Fleetwood Tramroad. (Photo: John Prentice)

The other factor common to all the layouts was the excellent quality (and quantity) of urban townscape or rural scenery, not to mention assiduous and realistic reproduction of road surfaces of various types. There is very little unadorned off-the-shelf railway track to be seen any more, and this is probably one way in which the hobby has improved unobtrusively over the years, thanks in no small measure to David Voice's series of books, the latest of which was just released in time for the Festival. 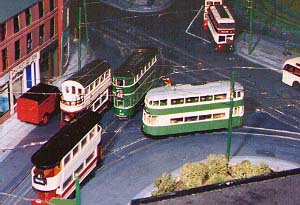 Behind the shelter in the middle of a roundabout there is no pretty nurse selling poppies from a tray, as in the Beatles' song, but instead we find a number of Liverpool trams in OO gauge on Ron Benson's Penny Lane layout. (Photo: John Prentice)

Working overhead is more common now than it used to be (I still don't know how Phil Carver achieves it in a scale as small as 2mm), and this is probably thanks to the increasing range of etched parts available at the Festival from Tower Models and the Sub-7 shop.

I must say too that (having spent the earlier half of the week at the Royal Agricultural Show at Stoneleigh) I was most impressed by the rural scenery on David Haynes' Manx Electric large layout, including a most realistic herd of Friesian cows (none of them mad, unlike their full-size equivalents ) as well as his superb MER interrural ('interurban' doesn't sound right ) tram models. 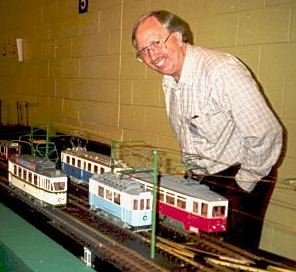 Other large layouts included Anthony Sibert's 1/16 scale double-track 'Liverpool Penny Return' featuring trolley-reversers, crossovers, and mainly post-war Liverpool cars in the classic 3/4" scale, as well as Brian Robinson and Tony Parkinson with their G scale Continental tramway, including the Saarbrucken 3-axle car that won the Frank Wilson trophy this year and a galaxy of other German cars operating in trailer mode. The complex automatic working of this layout attracted a great deal of interest. 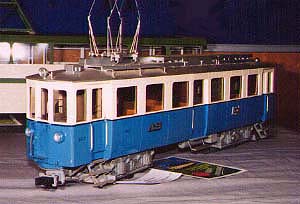 Also in G scale is this scratch built Swiss tram from the Aarau-Schoftland Railway built by Tony Parkinson. It received a "Highly Commended" in the models contest at the show. (Photo: John Prentice)

Another large layout, but in 4mm scale, was Dave Allinson's 'Tramstop', which must have had over 100 non-operative buses, trolleybuses and cars as well as all the working trams - truly a sight to see! (I hope they were all glued down - we're an honest modelling fraternity, but the Festival was open to the public at large!)

Turning to suppliers, Adrian Swain of A.B.S. Models was there with his usual wide white-metal kit range, which will shortly include the previous BEC 7mm/O gauge castings.

Mainstreet Models and Brumtrams had even wider ranges of card kits of trams, trains and buildings in 7mm and 4mm scales, and Squires Tools their usual helpful array of electrical and small-tool accessories.

G scale was well represented by Phil Elverd's 'Model Tramway System' range of brass, white metal and resin mouldings for UK prototype conversion of Bachmann cars which were available at a discount from Tower Models, and other specialist items for the US-outline modeller.

L.R.T.A., L.C.C.T.T., Middleton Press, Rapid Transit Publications, Adam Gordon, and Lancastrian Transport Publications completed the picture with a splendid array of books and publications, both current and out-of-print. Truly a treasure trove for the hobbyist to explore. 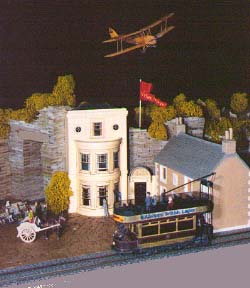 A Tiger Moth biplane flies over the Ennyware layout in OO gauge by the late John Severn. His friends from the East Midlands TLRS showed the layout as a tribute to their friend. (Photo: John Prentice)

The final item to report, and inevitably a more solemn one, must be the passing-away of one of the exhibitors, the late John Severn, a few weeks before the Festival. His impeccable 4mm layout 'Ennywhere, British Tramway' was nonetheless on display at the Festival, at the express wish of his sons. I am sure we all wish them our heartfelt condolences, and our thanks for giving us sight of their late father's masterpiece.