This is in Seville, Spain. The moving picture shows Plaza de San Francisco. Trams are running passed in the side street on the right in the distance.

A view of Mittlere Brücke in Basle (Basel, Bâle), Switzerland. Trams on routes 6, 8, 14 and 15 cross the bridge. The image updates about every 5 minutes. There are various options for earlier shots and a recorded "live" stream where the camera pans around.

From Basle (Basel, Bâle), Switzerland, we have a set of three cameras in the Voltaplatz area. Green town trams on route 1 and yellow Baselland trams on route 11 cross here. Position your pointer over the thumbnails from the cameras and the clever map below indicates the field of view. Click on the thumbnail and a larger view of that camera will be given, updating automatically every 30 seconds.

Unlike most of the Rhätische Bahn (RhB), the Berninabahn section, which runs over the Bernina Pass in Switzerland, is a 1000 volt DC metre gauge line which can be classed as a light railway. This camera shows the circular viaduct at Brusio. The image is a moving picture and there is a time lapse of the previous day. Our shot shows one of the original 1908-11 vintage Berninabahn cars. Some other cameras on the RhB are as follows:-

Miralago Station, on the Berninabahn
Filisur Station on the RhB main line
Selection of views on the RhB

This camera is mounted on the roof of one of the trains of the Brienz Rothorn Bahn (BRB) in Switzerland, a steam operated 800 mm gauge Abt rack mountain railway. From June to October the train runs from Brienz station by the lakeside to the summit at Rothorn Kulm. Views are taken every few minutes and an archive is held where they can be replayed at variable speed to give a high speed run. When the train is not in service it stands on a siding at Brienz station and other trains are seen passing by. During the closed season the camera shows other locations.

A short run uphill on the Jungfraubahn from Kleine Scheidegg is Eigergletscher station where there is an interchange with the Eiger Express cable car from Grindelwald. This camera gives a 360 degree panorama there, but is updated very infrequently.

Near Eigergletscher station is a camera on mast 4 of the Eiger Express cable car from Grindelwald. This camera gives a 360 degree panorama, updated every ten minutes. When facing south, the Wengernalpbahn from Grindelwald can be seen, with its avalanche galleries and Alpiglen Station.

No trams, but from Lausanne, Switzerland, we see a view of the road next to the airport where trolleybuses pass by. The image updates every minute from 0700 to 2030, but you will need to use refresh on your browser.

From Lausanne, Switzerland, we see a view from a studio window in Avenue d'Echallens, where trolleybuses pass by. The image updates every 60 seconds, but you will need to use refresh on your browser.

A tourist circular view in Lucerne, Switzerland. On the right end of the image is the Bahnhof interchange, where many trolleybus routes stop. The trolleybuses also cross the Seebrücke bridge on the right. The image updates every 10 minutes and there is an extensive archive of earlier shots.

This unusual camera is mounted in the cab of one of the trains of the Montreux Oberland Bernoise railway (MOB) in Switzerland, an 850 volt DC metre gauge line with some light rail features. The train runs from Montreux station through Gstaad to Zweisimmen, and then sometimes on to Lenk. The train has made the occasional run over the tracks of the GFM from Montbovon. Views are taken every few minutes and an archive is held where they can be replayed as a slide show. Our shot shows Montreux station with an MOB train on the right and a car of the MOB operated 800mm gauge Abt rack line to Rochers-de-Naye on the left.

Use the MOB camera above and watch out as you pass through Montbovon station, where the MOB meets the metre gauge Gruyère - Fribourg - Morat light railway (GFM), as seen here in our shot. The GFM track is to the north of that of the MOB. Montbovon is about 40 minutes from Montreux and an hour from Zweisimmen.

Again use the MOB camera above and note that on this same interesting camera on summer weekends you may also get a glimpse of the Blonay-Chamby museum line as you go through Chamby station, about 15 minutes from Montreux. Our view shows water car number 1 of the Biel tramway, built 1915.

This camera shows the MOB operated 800mm gauge Abt rack line to Rochers-de-Naye. It has an archive of views that is updated every ten minutes. The camera is located at the summit of the line looking downwards, with the railway curving away towards Caux.

Here is a series of views from the Hotel Eiger in Mürren, Switzerland. You will see eight small images and a main view. Each updates every 8 minutes during daylight hours, and the main view automatically displays each in sequence. Clicking on the small images changes the main to that scene. Cameras 5 and 6 cover the station of the Mürrenbahn, with 5 showing the tracks including the scissors junction just outside.

Here is a view of the railway station in Neuchâtel, Switzerland. Trolleybuses cross the foreground very close to the camera which is at trolley wire height. The page automatically updates every 2 minutes, but refresh on your browser will get you a more frequent update.

This is the summit station of the Rigibahnen (RB) at Rigi Kulm, Switzerland, with a small depot in the background. The RB operates two standard gauge light railways to this summit from Arth-Goldau and from Vitznau. They use the Riggenbach rack system. The service is usually 1500 volt D.C. electric but there are sometimes steam specials. The image is updated every hour, but there are archives of earlier shots.

From Wengen, Switzerland, we have a camera looking out from the "Downhill Only" ski club room towards the station of the Wengernalpbahn. This 800mm gauge Riggenbach rack railway runs up the alp to Kleine Scheidegg, where it meets the start of the Jungfraubahn, and then down the other side to Grindelwald. The image is archived every few minutes. Some years the camera has only operated in the winter season.

Also from Wengen, Switzerland, direct the "Downhill Only" ski club room but without archive, together with the previous view there is a second view towards the station of the Wengernalpbahn. 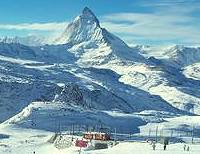 From Switzerland, we get a camera showing Zermatt's Gornergratbahn metre gauge mountain railway, with the Matterhorn in the background. This railway, built using the Abt rack system in 1898, runs on a 725 volt three phase AC power supply. The image is updated regularly, but you may need to use refresh on your browser. The view is close to the summit station, and sometimes includes passing vehicles.

From the roof of the offices of the newspaper Neue Zürcher Zeitung in Zürich, Switzerland, we get a panoramic view looking towards Bellvue and showing the building work of a new car park for the nearby opera house. Tram routes 2 and 4 pass here. The panoramic image slowly pans round, but speed, direction and zoom can be varied. The image updates every 15 minutes and there is an archive of earlier shots.

From a location on the City Hall (Stadthaus), Zürich Tourism gives us this scrolling panoramic view of the river Limmat in Zürich, Switzerland. Straight across the river is Limmatquai, with Quaibrücke to the right and Central to the left, all having many trams (Central also has trolleybuses). The panorama can be stopped and zoomed in to view the trams. The image is updated every ten minutes and earlier views can be seen, as can a time lapse option. In summertime, once per month on a weekend afternoon, museum trams on route 21 also pass this way. To check the dates and timetable for Museumslinie 21, click here.

From further north at the Marriott Hotel, Zürich Tourism gives us this second panoramic view of the river Limmat (and the Sihl) in Zürich, Switzerland. Controls are the same as the previous camera. Trams and trolleybuses are seen at many positions. Follow the line of the river for Limmatquai, this time with Bahnhofbrücke in the foreground. Looking down from here gives Walche-Brücke and to the right gives the tram stop at the east side of the Hauptbahnhof and further right the north side of the station, all tramway locations. As well as in the central districts, trolleybuses also can be seen crossing the river bridges at the far right of the panorama. Amazingly, from this camera trams on every Zürich route can be observed, together with views of all but one of the trolleybus routes and trams of the Glattalbahn.

This website in Konya, Turkey, gives a choice of traffic cameras. Click on the small images for high quality moving pictures, several of which contain trams.

Go now to Countries U to Z