Not a live camera, but the BBC have provided us a view from the driver's cab of one of the new trams in Blackpool, England. The run is from Pleasure Beach to North Pier.

This is a YouTube based live feed showing the entrance to the depot of the tramway at Seaton in Devon, England. The tramway is a 2ft 9in narrow gauge electric line, 3 miles in length.

Another YouTube based live feed, this time showing the passing loop at Colyford station on the tramway at Seaton in Devon, England.

As well as its main line railway exhibits, the Illinois Railway Museum at Union, Illinois, USA, has a large range of interurbans, streetcars and trolley coaches. On running days examples can be seen from the web cameras around their site. They have a variable automatic update which defaults to 8 seconds, but with a 2 second option for high speed lines.

After leaving Portland, Oregon, USA, the MAX (the marketing name for the light rail system) runs along the side of the Banfield Freeway, partly sharing the right of way with the Union Pacific Railroad. This link is to a map and a series of twelve traffic cameras on Interstate 84, in some of which the tramway can be seen. Clicking on the individual small view or the map gives a larger image which automatically updates every few minutes. 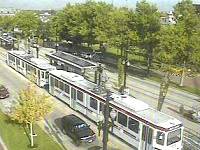 This link is to a set of traffic cameras in Salt Lake City, Utah, USA. where there is a main map showing the freeways and interstates in the city area and the route of the Trax LRV. You will see dozens of little 'cam' symbols and those next to the tram route will show the tramway. The time in Salt Lake City is GMT -7.

In San Francisco, California, USA, we get this moving picture in Castro Street at the intersection of Market Street and 17th Street. Heritage PCC cars approach from the right and go round the curve. In daylight hours (note time difference GMT -8), the service is about every 10 minutes. Trolleybuses cross in the background.

In San Francisco, California, USA, we get a moving picture in Castro Street showing Trolleybuses.

Go now to Countries A to B