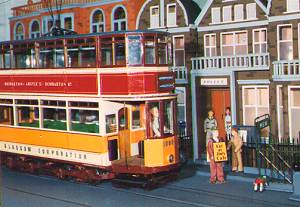 This display is built to 1/16th scale, that is 3/4in to 1ft. A tram automatically shuttles from end to end. It represents a street scene in the 1930s. The buildings are styled on those in East Ham, London. 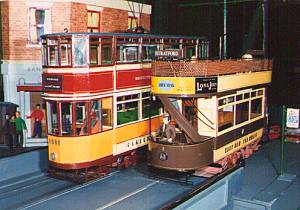 The canal bridge, from which the display gets its name, and the lock are similar to those on the Grand Union Canal. The trams are 3.5in gauge and are typical British types, mostly double deck, with overhead wire for electrical pick-up. 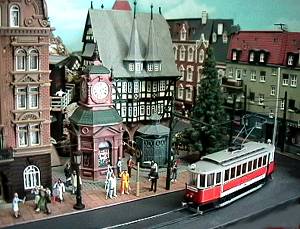 Johannesfeld (Jeanville in French) is a fictitious alpine town set in the Vosges in Alsace, France in the 1990s. Alsace was part of Germany from 1871 to 1919 and some German is still spoken in the area. The real Vosges Tramways closed in 1938 but our line (in 'H0' scale) was recently re-opened and is operated by a number of surplus and preserved trams borrowed from other European systems. 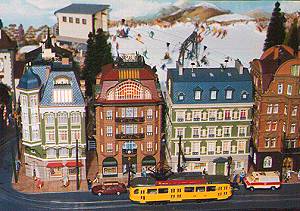 The tramway is a tourist link for the region's towns with the main line railway along the Rhine valley. Johannesfeld has this season opened its ski lift, and has installed snow making cannons, so there are good pistes even though the display is set in the springtime and the snow has gone elsewhere. 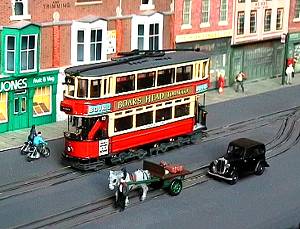 This tramway layout, in '00' scale, is based on the systems in the East End of London. It depicts the scene with conduit current collection in the Aldgate and Whitechapel area in the Summer of 1934. The buildings are in the style of those to be seen in Whitechapel High Street at that time, in some cases using actual shop names. 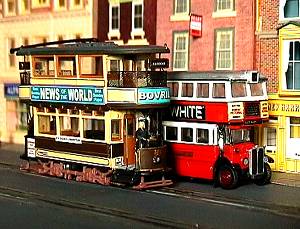 The London Passenger Transport Board had come into existence on 1st July 1933, and the tramways of the London County Council and the East London companies came under its control. Initially trams remained in their original liveries, with the company cars receiving a suffix letter added to their numbers (e.g. East Ham was "G"). Later cars were painted red and cream but without a fleet name. Buses were all at first painted in the "General" red and white livery. The "London Transport" name was introduced from May 1934, and was gradually added to all vehicles. At the period of the layout all these livery styles would have been seen.

1934 can be considered as a peak for London Transport tramways. The main tramway abandonment had not started and the largest variety of trams could be seen. On 27th October 1935 the first London Transport replacement of trams by trolleybuses took place. By 9th June 1940 the last tram had run in the East End streets. At this point Herr Hitler's Luftwaffe destroyed most of the buildings in the area of the layout. Thus in six short years the scene of the model was lost forever. 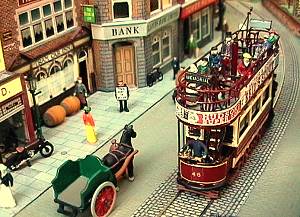 Torhampton-on-Sea is a small layout in '00' scale depicting the seafront of a typical seaside town in 1910 and showing a tram running on the Dolter surface contact stud system. The scene is styled on a combination of the seaside Dolter stud systems of Torquay (1907-11) and Hastings (1907-13), with a nod towards the buildings of Wolverhampton which used Lorain studs (1902-21).

Surface contact studs were used to avoid the use of ugly overhead wires. An electromagnet was fixed to the tram. When this passed over a stud, the magnetism closed contacts within the stud and the stud head became live. A skate under the tram picked up the electricity. Once the tram had passed, the contacts opened and the stud became dead. 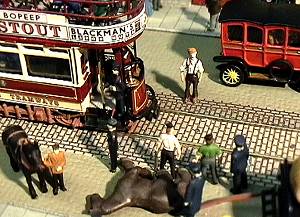 Sadly studs were sometimes left live and despite safety warning devices fitted on the trams, occasionally animals or people received electric shocks, as has happened to the unfortunate horse on our track. In the UK, in addition to the systems already mentioned, studs were used in Mexborough (Dolter, 1907-08), Lincoln (Griffiths-Bedell, 1905-19) and briefly on trial in the Mile End Road, London (Griffiths-Bedell, 1908). 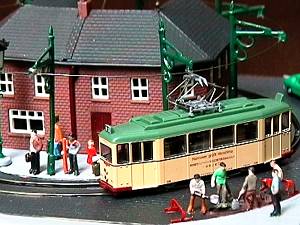 This working diorama or small layout is in N gauge. The scene is set in Germany with a Hannover tram running on a circle of track around a building containing shops. The prototype of the tram was one donated to the tramway of Hiroshima in Japan. 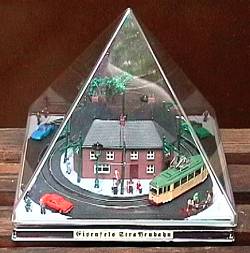 The display demonstrates just how small a working exhibit can be. It is a novelty in that it runs inside a Ferrero Rocher chocolate box, a special pyramid shaped type that is usually only sold at Christmas. The name of the layout is a bilingual pun on the name of the chocolates. 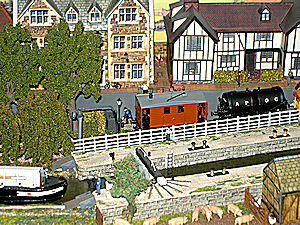 The layout represents a railway line between a road and a canal. It is dual purpose and can be used either for railway trains or steam trams. It is loosely styled on a combination of Wisbech and Upwell, Wantage and a Great Western branch line siding. The period is around 1925. 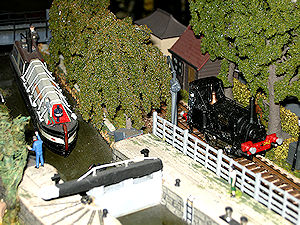 Trains or trams can shuttle between a small halt at one end, passing the canal lock, to a quay at the other where goods can be transferred to the canal. Behind is a street scene with country style houses.